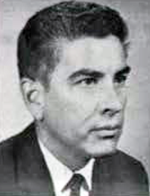 Mr. George Quintero was the first Registrar at Yavapai College when it opened in 1969.  He was responsible for the monumental task of setting up all the student registration functions for the college and maintaining student records.  When Prescott College closed temporarily in 1973, Yavapai College took on the responsibility of maintaining the student records from that institution until it was re-established.

In addition to his work as Registrar, he also participated in campus committees.

Mr. Quintero retired in 1983 and was given Emeritus Faculty status April, 1984.