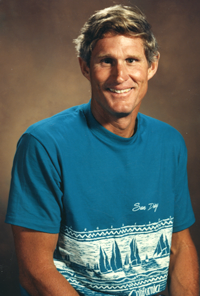 Mr. James “Kimo” Miles began in the Physical Education Department at YC in 1975. He taught Swim Fitness, Life Saving, Beginning and Intermediate Swimming and other physical education courses over the years.

When Kimo first came he mentored YC’s Amateur Athletic Union (AAU) swim club and worked with mentally handicapped children each week. When he wasn’t teaching classes for young and old, he prepared master swimmers for competitions, and coached the Prescott Swim Team, a local youth team for many years.

Mr. Miles retired in 2004 and continued to teach part-time for several years after his retirement.

Mr. Miles was recognized as Emeritus Faculty in May, 2009.