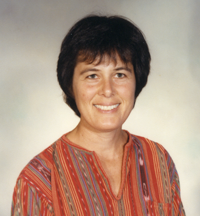 Nina Perlmutter started teaching part-time at Yavapai College in 1983. She became full-time in 1994; retired in 2006 and continues to teach as an adjunct faculty. When she started teaching full-time the college had no Philosophy and Religion program. She built the program up from a small scattering of classes.

She loved working with the students exposing them to new ideas in the introductory classes of philosophy, religion and ethics. For several years the college endorsed the Connections program where instructors from multiple disciplines would teach the same subject but from different perspectives. Ms. Perlmutter was very involved in that program and thought it offered a wonderful, well-rounded, learning experience for students. She was disappointed when the program was discontinued.

Nina preferred face-to-face learning and declined to teach online classes. She wanted to connect with her students and have them connect with each other so that they could all see how philosophy and religion applied to their lives. She felt her personal mission was to bring quality education to a small community via smaller classes.

Ms. Perlmutter taught in the Eldershostel program for many years. She also loved having "Retirement College" students in her classes. She felt the presence of the older students really enhanced learning for all.

One of Nina’s students, Frank Coburn, in her Environmental Ethics course (PHI 210) was inspired by what he was learning about environmentalism in action. For an assignment, he was required to do a project on that topic. He wrote a paper proposing that a trail should be built around the Prescott Campus to showcase the unique, natural spaces. Seeing this as a viable opportunity, Nina brought Frank’s paper and the proposed idea to the Non-Motorized Transportation Committee which was working on different non-motorized access to the college. Frank and other students in the class along with Marcie Keller, Michael Brown, Kirsten Adaniya and other members of the Non-Motorized Committee helped bring the trail to fruition through a series of grants from the Heritage Fund, the YC Foundation support and the technical expertise of Okanagan Trail Construction. As part of the Arizona Trail system, this 1.5 mile long trail now serves as a valuable urban outdoor opportunity for the Prescott community and continues to be used as an example in the PHI 210 class of how ideas can come to fruition.

A former Verde Valley Campus student, Mr. LaBarbara, left money in his estate to the college with the express purpose of promoting education in philosophy and Aristotle. Ms. Perlmutter, as head of the Philosophy program, was put in charge of spending the money to fulfill that purpose. A number of faculty were able to attend annual Critical Thinking conferences in California, library materials on critical thinking were purchased, videos were purchased for faculty to use for themselves and for classes. Nina also developed a class on Critical Thinking and ran a workshop at a Faculty Development Week. The goal of the project was to promote critical thinking throughout the curriculum.

Another activity that Nina was involved in was the annual Banned Book Observance on the Prescott Campus. Activities included displays of banned books in the library, public readings of banned materials, and class discussions about censorship. Faculty from several departments joined in on this. Nina also worked on organizing activities for Women’s History Week.

She and another adjunct instructor founded the Adjunct Faculty Organization to give voice to the concerns of the part-time faculty, to raise the perceptions of the abilities and merits of these instructors, and to bring the adjuncts together socially.

Ms. Perlmutter considers Yavapai College to be an asset to the community bringing many good and diverse things to the county. She views education as vital to a person’s growth.

Nina Perlmutter was recognized as Emeritus Faculty in December, 2006. 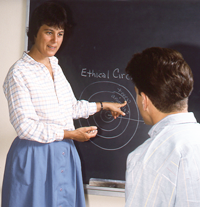 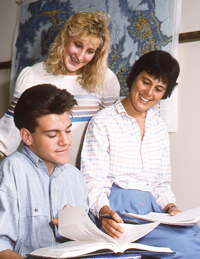