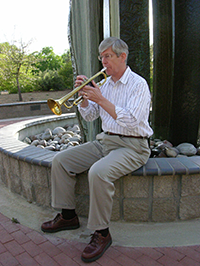 Dr. Breiling joined Yavapai College as Music Instructor in August of 1995 and retired on May 2014.  Throughout his career he expanded the Instrumental program at YC from three to eight ensembles, developed a Music Theory Preparation class, expanded Guitar classes into a four-semester sequence, and raised approximately $135,000 for music scholarships through departmental concerts.

Dr. Breiling organized and administered ten high school band festivals which brought hundreds of high school instrumental musicians onto the campus.  He established the “Friends of Music” auxiliary of the YC Foundation whose primary focus is to support student scholarships.

Under Dr. Breiling’s direction, the Trailblazers Big Band received 1st place in the Community College Division at the nationally renowned Reno Jazz 50th Anniversary Festival at the University of Reno in 2012.